The Folded Man captures the smell and essence of Britain through its main character, his desires, addictions and strange courage. Written with direct vividness that keeps one inside its totally realised world. 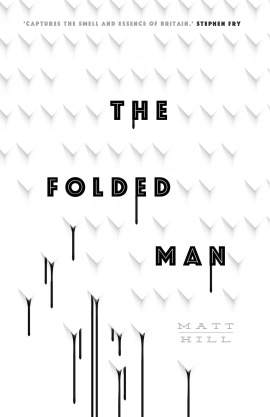 The Folded Man, my debut novel, was published by Sandstone Press in 2013. You can order it from Amazon here, or Waterstones.

From the book’s reverse:

Manchester is a rotten city propped up by a few bad men. After the cuts, the toppling of its flagship tower, the riots and the terror, the promise of a prosperous North is gone. The first industrial city is dying – its people left to fend for themselves. With the rise of nationalism, it’s only getting worse. Now, the only currency is trust. And Brian Meredith – addict, depressive, wheelchair-bound – has new trouble with old problems.

It doesn’t help that Brian is a mermaid – or at least thinks he is.

A debut with an unforgettable central character, The Folded Man is a dystopian satire in the tradition of Swift and Orwell but very much of the 21st century and a country with serious choices before it.

The Folded Man was named runner-up in the fiercely competitive 2012 Dundee International Book Prize by a judging panel including Stephen Fry and Philip Pullman.

First past the post
Alright sunshine
Having a chilled one